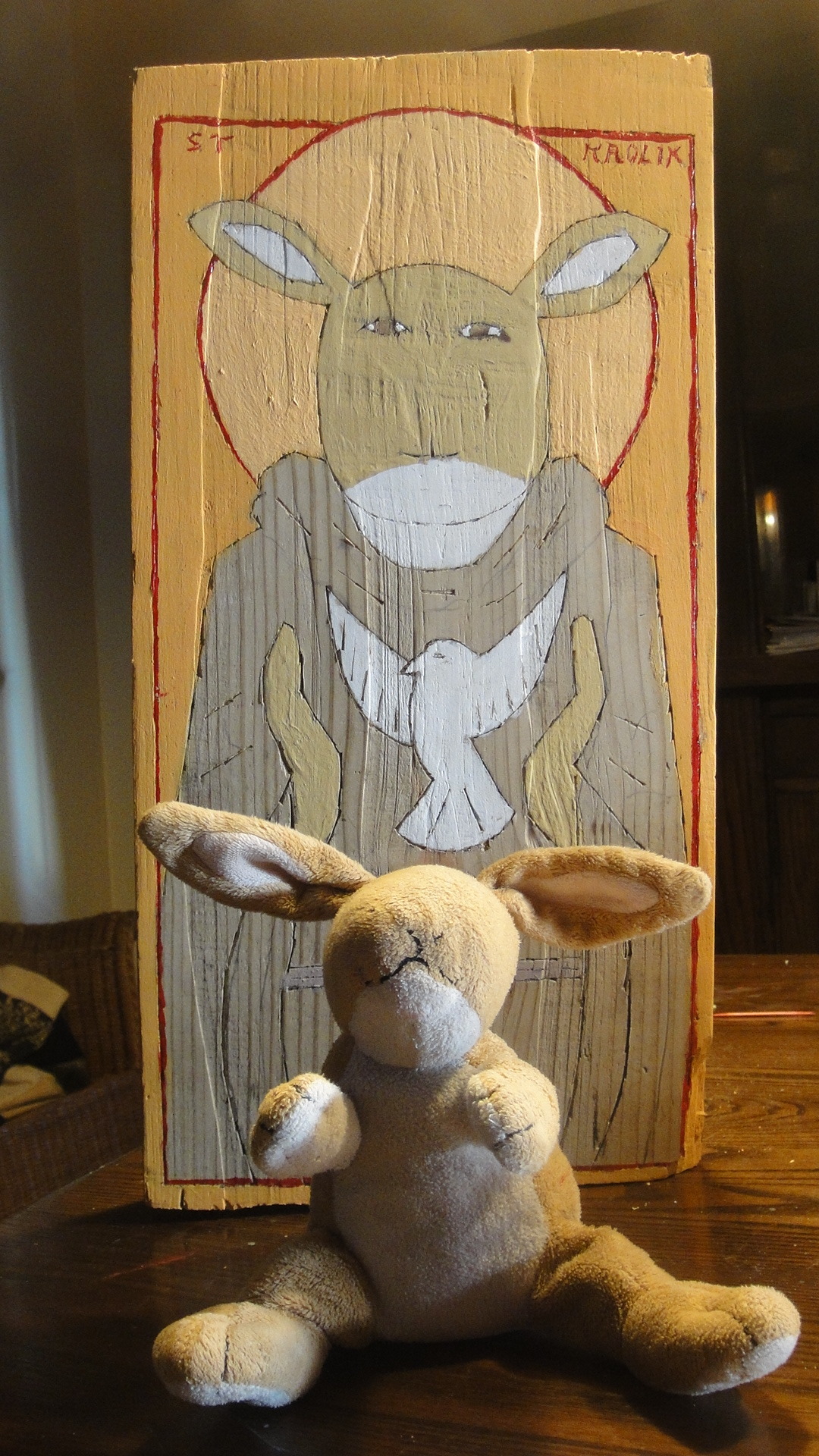 When we met our oldest daughter for the first time, we brought her a small stuffed bunny. We called him Krolik, because that’s the Polish word for rabbit. Adoption from a Hague Convention country such as Poland requires at least 2 visits: the first to meet and agree to adopt the child, the second to stay as a family through the bonding period, court proceedings and visa-approval. So we needed a surrogate for what ended up being 4 months between meeting and starting to love her, and actually being able to lovingly parent our daughter in person forever. We needed a part of ourselves to show her we would come back. Krolik did that for us.

As is my modus operandi I thought the book was the point. The adoption agency had suggested we bring a book to give her as a gift on the first trip, and I had bought one of those Hallmark books where you can record yourself reading the book, so that as she turned the pages she’d hear us. I bought the little bunny as an after-thought because it was sitting next to the “Guess How Much I Love You” book in the display. We don’t know how often our beloved daughter looked at the book we had left with her in that interim period, but when we returned she didn’t seem too interested in it. But the bunny – he was her constant companion.

And Krolik was hilarious! He jumped and flipped and kissed by nuzzling nose-to-nose. He was just the right size for her little hand to grab him by the neck, the perfect companion for exploration. It was understood by all of us that Krolik was an essential player in any action we might take – indoors, outdoors, awake or asleep. But he liked to tease us. Sometimes he’d rocket across the floor of a museum, as if to say, “Can you find the real masterpiece in this picture?” Sometimes we’d rush into a cab, only to look around checking for all the necessities, panic-stricken until we spotted him on the bench we’d been waiting on outside.

We only lost him once, and it wasn’t abroad. It was in the drug store closest to our home. When we arrived home without Krolik, my cheerful, compliant daughter refused to get out of the car. She couldn’t tell me why, but it didn’t take long for me to figure that out. Like the mom in “Knuffle Bunny” my first thought was, “Where’s the bunny?” We rushed back to the drug store and re-traced our steps. The employees had just changed shifts and hadn’t seen us earlier. As we turned to leave, there was Krolik sitting atop the checkout that wasn’t being used – too high for my daughter to have put him there – so somebody must have seen him on the floor, known he was much beloved, and raised him up for those who would surely return for him.

Many adoptive families celebrate a specific “family day” and some even call it “gotcha day.” For us, it was such a gradual process, and meeting our daughter was followed so quickly by leaving her again for months. Plus the court date was in the middle of our second, extended time in-country together, so we decided to observe the first day that we took over from our surrogate parent, Krolik, as our milestone. We call it The Feast of St. Krolik, or Krolik’s Day for short, and we go out for carrot cake.

Months after our first Krolik’s Day (1 year anniversary), when I became visibly pregnant, what we had been telling our daughter about having a baby in our family and becoming a big sister became real in a way that surprised my husband and I. And if we’re honest, also hurt a bit. She tossed Krolik aside – physically out of her bed – for a baby doll. On one level, we understood. She was adjusting and living into her new role as protective older sister. But Krolik wasn’t just a bunny; he had stood in for us. He was the physical personality that had communicated in our absence how much she was loved. And he made every day a rollicking adventure.

When Little Sister was about 9 months old there was a resurgence of favor for Krolik, mostly as a baby-tickler. Now he’s making another comeback, but to be very clear, now like every doll or stuffed animal in this house of two daughters, Krolik is most definitely a “She”. We love her so much and are amazed by her every day. And Krolik too.

It has been an adventure-filled 5 years.

One thought on “The Feast of Saint Krolik”

Food for thought and action!